Can a car headlight be a projector? Let beautiful graphics reflect on the road

Project a brighter beam of light onto the road without blinding anyone.

Car headlights and projectors seem to have something in common, but one is used to illuminate the night and the other is used to project image information. With the development of car light technology, car companies also have more brilliant capital in headlights. Projection headlights are high-performance headlights that were originally only used in luxury cars. They can use very bright high-intensity discharges (HID) and light-emitting diodes (LEDs), but they are a bit unsafe to use with traditional reflector headlights.

Due to the way the projection headlights are designed, they are able to illuminate more roads at greater distances. They project a more focused beam of light than a reflective headlight, which means that more light is projected directly into the front and less light is spilled where it is not needed.

How the projection headlight works

Projection headlights consist of a headlight assembly with a replaceable bulb, similar to reflective headlights. They also include a reflector assembly, but the similarities end here.

The overall design of the projection headlight is to focus the light with a special shaped reflector, and then use a shutter to project it onto the road. The beam pattern is evenly distributed and tightly organized.

The basic components of a projection headlight are:

Reflector: Like classic reflector headlights, projection headlights actually include a component called a reflector. The difference is that they use elliptical reflectors instead of parabolic reflectors. This difference in shape causes the light from the bulb of the projected headlights to focus on a narrow spot near the front of the reflector before passing through the shutter.

Shutter: The shutter is one of the most important parts of a projection headlight, which is not found in the classic reflector headlight housing. This component is inserted into the beam from below, which results in a sharp cut-off effect and effectively directs the light to the road instead of letting it blind other drivers. We can switch the high beam and low beam by raising or lowering the shutter.

Lens: This is the last component of the projection headlight. It is designed to evenly distribute the light beam aimed by the elliptical reflector and shutter. Some projection headlamp lenses also have a function that softens the dividing line between light and darkness when the headlight shines on the road.

All projection headlights are based on the same design, but they can use several different types of bulbs. Briefly explain the difference between these bulb types:

Halogen: A type commonly used in headlights, similar to reflective headlights. Although they use old-fashioned halogen bulb technology, these headlights typically project a more uniform beam of light than a mirror, with a clearer line between light and dark.

HID Xenon lamps: Xenon headlamps are high-pressure gas discharge lamps, also known as heavy metal lamps, which ionize xenon gas at high voltages to generate a light source between two stages of the power supply. The advantage of the xenon headlight is that its brightness is twice or even higher than that of the halogen lamp, which can effectively improve the lighting effect. In most cases, placing a hidden light bulb in a halogen-designed projection housing may result in a brighter light bulb.

Angel Eye Headlight: Angel Eye is an aperture that was first applied to BMW. Its function is driving lights, which is what we usually call "small lights" (light control levers are twisted), and can also be used as decoration. At present, angel eyes are divided into three types: cold cathode tube type, whose material is glass, and the structure is similar to fluorescent lamps; light guide fiber type, the main representative is BMW's angel eye, this type of aperture uses light guide fiber; LED type, uses Light-emitting diodes emit light. The early LED angel eyes were just a single light-emitting diode, which used a light guide to guide light.

Projection headlights have many advantages and also some disadvantages.

Other drivers are less likely to suffer from night blindness;

Compared with reflective headlights, it has a more uniform light pattern and fewer black spots;

Headlight components tend to be deeper and take up more space;

The benefits of aftermarket projection headlights are the same as the original equipment installed in the new car. But there are also some problems, all of which are related to the difference between the reflector headlight cover and the projection head light cover.

Note: Do not install projection headlights like HID bulbs in the reflector. Doing so blinds other drivers because the HID bulb is so bright that the reflector cannot control the direction of light leaving the vehicle.

This is easy when installing a new projection headlight. If you want to install components on the damaged headlight, it is not that difficult, but it still involves some wiring work, such as some plugs and adapters.

If your car doesn't have a projection headlight, another option is to use a universal modification tool. These kits often come with reflectors, blinds and lenses, which require installation in existing headlight assemblies.

Refurbishing an existing headlamp assembly is estimated to be difficult because you need to remove the assembly, replace the internal reflector with new reflectors, shutters, and lens assemblies, and finally reseal the unit.

Unlike kits designed for specific models, universal projection headlight kits usually require you to cut and solder wires to install new electronic components that are necessary to power new HID or LED bulbs.

But don't worry, as long as they are installed correctly, certain models and universal projection headlight kits are safe and reliable, because they include improved reflectors, shutters and lenses, which will make you feel like you bought a new car.

Do you know anything about projection headlights through this article?

Many car companies have installed projection headlights on high-end cars, such as Mercedes-Benz. Briefly introduce this case:

Mercedes-Benz ’s DIGITAL LIGHT translates directly into the meaning of “digital lighting”. There are 4 LED lighting units in each headlight group of the Maybach S-Class. Project to the road ahead. Together, the left and right headlights are equivalent to a Maybach S-Class capable of projecting more than 2 million pixels of light. 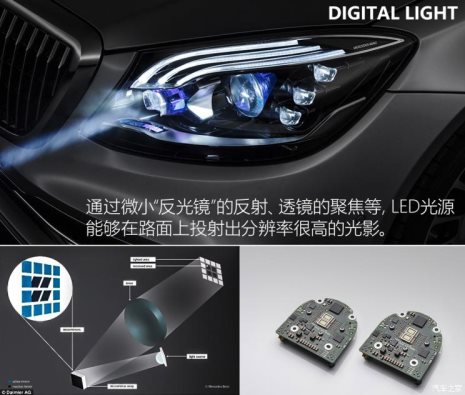 Such "high-definition" pixel beams are a piece of cake for local lighting. In the face of an oncoming vehicle or pedestrian, it can intelligently block the light shining on the eyes of the opposing driver or pedestrian. Forgetting to switch the far and near light and being scolded as a "far light dog" improved road safety.

The chief engineer of the Mercedes-Benz plant said: "We pursue not only the recording of lights, but also the best purpose of optimizing the lighting effects, but also let others see the roadblocks clearly." These functions can build better for drivers and other traffic participants Temporary communication and significantly improve the safety of night driving.

LED headlights can indeed provide benefits for human convenience. It is not only the gold content of headlight technology that determines good or bad, but the digital intelligence behind the headlights.

The difference between the two sides is obvious. The Mercedes-Benz digital smart headlight can accurately adjust the brightness and range of the light to avoid direct light on the face. Ordinary lights shining directly on pedestrians' faces can be boring.

When the sensor detects a pedestrian, it can project a zebra crossing on the ground to indicate that it is safe to cross the road. It can also project high-resolution signs on the road. For example, stop warnings, guidance signs, icing warnings and distance prompts will also be retained in the production version.

Safety is an important pursuit. When passive safety has reached a certain bottleneck, it is the goal of future car companies to use the power of technology to increase the safety of drivers and other traffic participants in vehicle equipment. Implemented this plan!